Items are being accepted for the next Collectors' Auction

We are happy to provide pre-auction advice, free of charge on items you may wish to consign to this auction You are welcome to email us photographs of items to info@amershamauctionrooms.co.uk Or contact us on 01494729292 for an appointment to bring things in for appraisal 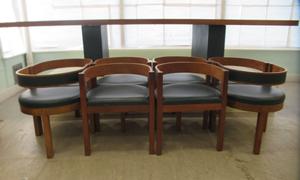 To be sold on Thursday 7 October

and a set of eight Andaman teak framed and laminated, semi-circular,

(An identical table was commissioned by the late Baroness Thatcher)