Intended to be a warehouse for the adjoining International Stores but never used for the purpose; the premises now occupied by Amersham Auction Rooms began life in 1907 as the Bijou Hall, for light entertainment, dancing and lectures.

In 1922, the then proprietor, Mr Walter Collins, a local pianist and composer, re-named the building The Pavilion, as a cinema, for the showing of silent films with piano and percussion accompaniment.

At the same time, a small cafe was opened in the basement and a 3d ticket entitled the holder to a seat and a cup of tea or a bag of sweets if you were a child! 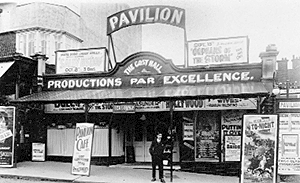 The adjoining premises in 1909 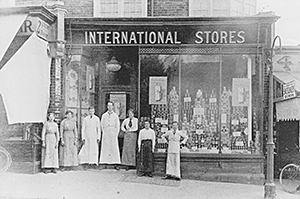 Later acquired as the theatres café The front in 1924

In 1926 Mr Collins and local builder, Alfred Woodley, saw the development of films with sound as an entrepreneurial venture and as Colwood Pictures Limited, they developed the Regent Cinema in Sycamore Road, Amersham and upon completion of construction in 1928, The Pavilion closed. However, it remained open as The Playbox Theatre when the local amateur dramatic group rented the property – where productions continued until 1934, when the professional repertory theatre came to the town.

Yet another re-naming, after a short ‘interval’ The Playhouse saw Sally Latimer and her Company in partnership with John Penrose, running a repertory theatre – later to be joined by Carl Jenner.

Seating had been expanded to 240 and the adjoining premises, formerly International Stores, was acquired as a replacement for the basement cafe and an enlarged box-office – that lower level then became dressing rooms and other accommodation for the theatre.

The Wartime evacuation swelled the only permanent theatre in Buckinghamshire but sadly, by 1945 the increasing popularity of television saw attendances fall off and crisis after crisis led to its eventual closure in 1955.

After a short period, the then empty premises were acquired by Pretty & Ellis, already long established local Auctioneers, Land & Estate Agents, as a permanent home for their emerging Furniture Sales Division. Indeed, at the time, the firm claimed to be the first to run auction sales from dedicated premises, in the South of England, outside Greater London.

The Pretty & Ellis business required another change of name and as Amersham Auction Rooms it has remained and become a nationally and internationally respected participant in the auctioneering business.

It is regrettable that the ravages of time necessitated rebuilding the front elevation but much of the original theatre layout has been retained and to many, the sense of entertainment continues with the firm’s weekly auctions!